Although I hesitate to draw more attention to John Cooper of Skillet than is absolutely necessary [and it’s almost never necessary]I felt the need to respond to something pretty awful he just said at a recent gig.

As reported by Relevant Magazine, Cooper has made statements about the need for Christians to “declare war on this Christian deconstruction movement.”

Now, it’s no secret that those in the Reform and Evangelical Christian camp are getting pretty freaked out about deconstruction these days. They don’t know what it is. They don’t know what’s causing it. They just know that means they’re losing followers and their hold on Christianity in America is crumbling, and they don’t like it.

By now it should be obvious that the idea of ​​a person following Jesus – the Prince of Peace – declaring war on anyone, for whatever reason, is a pretty big red flag that that person is not following. Jesus. [At least not when declaring war against those who disagree with him].

But, what really bothers me the most is the question of what exactly does he mean by “declaring war on this Christian movement of deconstruction”? Are we talking about contract killers? Or gun violence? Does he want evangelical Christians to start targeting people who deconstruct?

I guess what I really want to know is: What does this war against Deconstruction look like?

The ambiguity here is what concerns me the most. There is at least a hint of violence in his statements and enough gray area that some in his audience could easily fill in the blanks to justify an assault on their own brothers and sisters in Christ who dare to question the status quo of their faith.

Is this what they want? Is this really the best way to go?

What Cooper and others don’t understand is this: they’ve already been at war with those who dare to doubt or question their version of Christianity for a very long time now.

In fact, it is this toxic and hateful response to those who question and doubt the status quo of evangelicalism that is driving the deconstruction movement.

It’s true. If pastors, preachers and church leaders would take the time to listen to those who doubt, or even give those people a safe space to address their questions, there is a good chance that this deconstruction movement whose they all so afraid wouldn’t exist. at all.

Why? Because their churches would give them time to work out their faith, support them and love them no matter where they land on doctrine, and support them as they question the answers that no longer have meaning. sense.

Unfortunately, the Evangelical Christian Church has proven that there is no room for questioning and there is no tolerance for doubt. Either you accept their declaration of faith or you are eliminated.

And so people went out, and keep going out, because they find they’re not welcome anymore.

The war that Cooper calls has already begun. The real question is, can we stop it before more people get hurt?

I have already approached other evangelical leaders who have made it their hobbyhorse to demonize deconstruction and claim that progressive Christians are not “real” Christians. People like Alisa Childers and Sean McDowell have ignored my pleas for open dialogue, interviews or even a phone call to talk about the dangers of creating division in the Body of Christ rather than working for reconciliation as Christ has us. ordered.

So far all I’ve gotten is radio silence, and [at least in the case of Sean McDowell]a friendly “No, thank you”, even if he admits that it causes division in the Body of Christ [as he has been doing lately] is “an abomination to God”.

Now high profile evangelicals like John Cooper of Skillet have gone and declared war on Christians who disagree with their particular version of the faith.

And after? Bounties on our heads? Burn at the stake? Publish our home addresses so that we can be harassed and silenced by those who would like us to shut up and stop asking questions?

I shudder to think.

But the bottom line is that when Christians declare war on other Christians, everyone loses.

Rather than declaring war on us, why not sit down and listen? Why not engage the questions? Why not try to appreciate that those who deconstruct their faith draw closer to Christ rather than further away?

If war is what they want, I only hope and pray that it is reconciliation and mercy that they receive from those they oppose.

Nothing can be done by making hate for hate, or violence for violence.

Like it or not, John Cooper is my brother in Christ. We may not agree on penal substitution or eternal conscious torment, but neither did early Christians for the first 500 [or even 1500] years of Church history.

I refuse to be dragged into a war with my own family.

If John Cooper, or Alisa Childers, or Sean McDowell wants to understand us – rather than attack us – I’m open to listening and sharing.

I can only hope and pray for them, and the rest of the evangelical community, to overcome their outrage and confusion long enough to do the same.

Here is the unity of the Body of Christ. 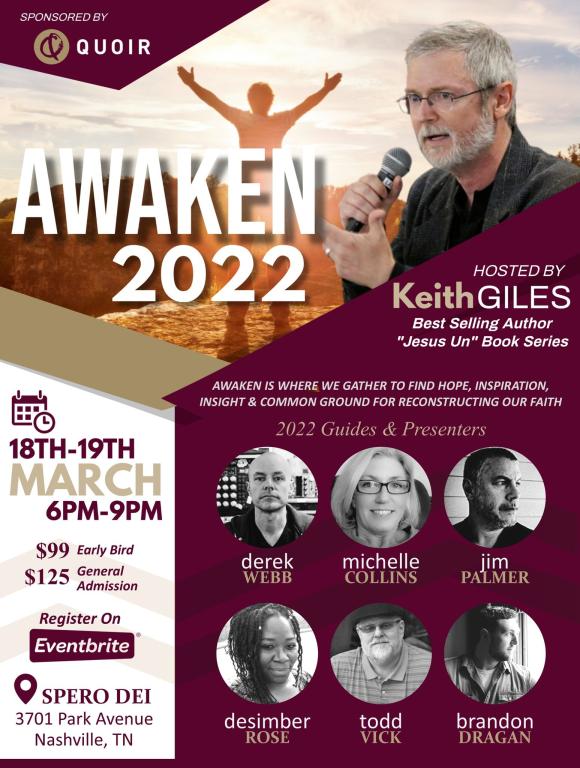 Keith Giles is the author of the best-selling 7-part “jesus oneQuoir Publishing book series. His last – and last book – of this series, Jesus Disarmed: How the Prince of Peace Disarms Our Violence is available now. Keith is also the host of Second cut with Keith [a new solo podcast available now on the Ethos Radio App, for Apple and Android and on Spotify; and the Heretic Happy Hour Podcast [along with co-hosts Matthew Distefano, Dr. Katy Valentine, and Derek Day]and the new YouTube Channel Imaginary Lines with poet Darrell Epp. He and his wife, Wendy, currently live in El Paso, TX and work with International peace catalyst.