Tonight, Thursday, June 9, more than a year after beginning its investigation, the January 6 Committee will hold its first public hearing into what happened on January 6, 2020, when Trump supporters stormed the United States Capitol and attempted to stop the vote count for the presidential election. Finally, we’ll start getting answers about who planned it, who ran it (we know who instigated it) who conspired to undo democracy, how did Trump’s fake voters play a part in this, who was coordinating and leading the right-wing militant groups involved in this, and what other elements were there for this coup attempt,

One might be tempted to ask Trump and the advisers around him in the weeks following the election that culminated on January 6; as one Republican lawmaker asked in 1973 about the Nixon-Watergate debacle, “What did he know, and when did he know it?” 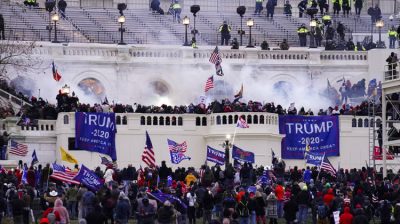 Violent protesters loyal to President Donald Trump storm the Capitol, Wednesday, Jan. 6, 2021, in Washington. It was a glorious day as a number of lawmakers and then the crowd of protesters tried to overturn the US presidential election, undermine national democracy and prevent Democrat Joe Biden from replacing Trump in the White House.
AP Photo/John Minchillo

It is likely that a significant percentage of the American population will not see this report in prime time because the Fox cable channel chose not to cover it; apparently because he disagrees with their marketing premise that the election was stolen. Other major networks and major cable news channels will cover it, most starting at 7:00 p.m. MST.

Fact: the election was not stolen. President Joe Biden secured a respectable majority of the popular vote and the electoral college, Trump’s own election security administrator, Christopher Krebs, called it “the security election in United States history.” and even Attorney General William Barr said there was no voter fraud.

The crowd was led to the Capitol by then-President Donald Trump, who senior sources said was determined to cling to power; democracy is doomed.

Here are the questions Americans need to ask themselves: Do you believe in violence as a tool of political force? Are there any circumstances in which you think this is warranted? If so, then you will have to look deeper and realize that you may not be as strongly pro-democracy as you say you are. Because if you did, you would understand that violence is the opposite of the democratic ideal.

It has been said that “much of the right does not like freedom when its opponents exercise it”. The far right also doesn’t seem to like democracy when we exercise it. At this point, that sentiment might have many of us wondering if democracy can withstand such a headwind. Those who follow extremist movements say January 6 was not a singular incident. He was part of an anti-democratic, authoritarian, white supremacist movement.

Since yesterday, the Republican eminence of Colorado Joe Oltmann, who called for the mass hanging of political opponents, launched a new call to take control of the American government. He refers to something called the petty magistrate doctrine, an idea promoted by religious extremists. #copolitics.

In a chilling social media post, Oltmann says, “…We now have the ability to circumvent the 7,400 elected ‘leaders’ and the compromised and corrupt judiciary…. think they don’t have rules, so neither do we. Restoration requires you to tear it down, without permission. we are the least magistrate. He encourages his supporters to “be ready, we will present you with a plan”.

Voice of the Valley of the Ark encourage everyone, regardless of political party, to watch this first public hearing because the information is more important to our future quality of life and the existence of this republic than most of us realize.