Inside a wartime Ukrainian Baptist church

First they had to buy a car.

As the threat of a Russian invasion grew on the horizon, some ignored it, thinking it was unlikely. But Vika Aharkova, who ministered alongside her husband Vasyl among the 20,000 international students in Kharkiv, near the Russian border, “kind of knew it was coming,” she said.

It’s easy to delay when the crisis hits. It’s easy to think of the many plausible reasons why the worst won’t happen. They always prayed for peace. But they also knew they had to be prepared.

They needed a car.

“If we know there is going to be a war, we have to buy a vehicle,” Vika said. “So we can evacuate quickly.”

Vika and Vasyl appealed to supporters for funds to buy a car, and two days later, funds in hand, Vasyl traveled to Lviv in western Ukraine to purchase the vehicle. He immediately returned to Kharkiv, a 14-hour trip.

The invasion began eight days later, at 5 a.m. on February 24. At 5:30 a.m., Vika and Vasyl were in the car, each carrying a single backpack.

By the time they left town, they had five more people, along with five more backpacks: Vasyl’s sister, a couple from their church, an elder’s teenage daughter, and a medical college student. .

No one took extra luggage, but they made room for a cat.

They would drive nonstop to Lviv, this time a 36-hour trip. Many people from all over the country have fled to Lviv now. To the west, near the Polish border, it’s safer.

Here, many churches and many evangelicals like the Aharkovs have turned to face the crisis head-on.

Vasyl and Vika Aharkova, ministers of the International Fellowship of Evangelical Students Kharkiv campus, fled their home less than an hour after the Russian invasion.

Step onto the grounds of the Central Baptist Church, for example, and the place is buzzing. Parked in front is a bus that will take evacuees to the Polish border. Inside are several rooms serving as temporary shelters for displaced people, like Irina Malko, 38, and her dog, Zaya, who also fled the city of Kharkiv.

Go down the stairs a few floors and you will find several women cutting fabric to use for camouflage nets for the army. Walk a bit further, to the church kitchen, and you’ll find women preparing meals – for guests leaving on the bus ahead and some staying longer.

The church is the new temporary denominational headquarters, which houses the staff of the Ukrainian Baptist Union. The union was located in Irpin, a kyiv suburb that quickly became a battleground. Now it is at the Central Baptist Church in Lviv. 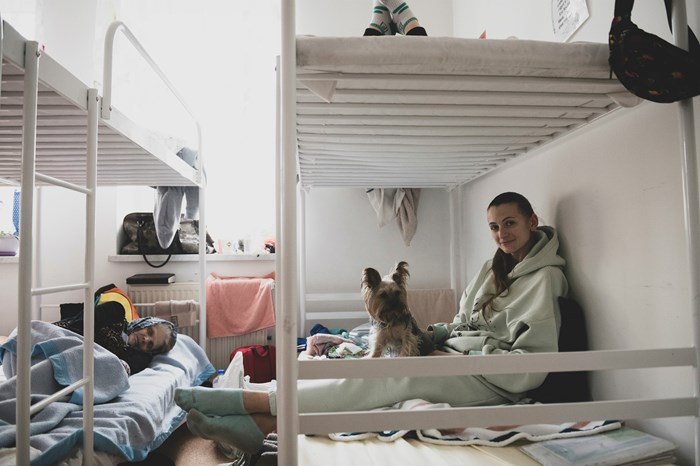 Irina Malko, 38, and her dog Zaya fled the city of Kharkiv and found temporary shelter at the Central Baptist Church in Lviv.

In a hall of the church is a large map of Ukraine, multi-colored thumbtacks indicating distribution points – churches of different denominations, missionary organizations, etc. – where humanitarian aid from Haus der Hoffnung, a German Christian organization, can be sent.

Down the hall, Igor Bandura, vice-president of the union, worries about what will happen if the Russian army succeeds in taking Ukraine.

“The battle is huge, and it’s not just about Ukraine,” he said. “If Ukraine was taken, it’s only a matter of time before Putin moves forward. Poland has understood this well. The Baltic States have understood this. Romania understands this.

He stopped praying for peace. Now he prays for victory. He prays for himself and other Christians and the country as a whole to face the crisis head on. He prays that the Russian people will see the invasion for what it is.

“Most people just don’t want to know the truth,” he said in a sermon a few weeks ago. “They are easily attracted by state propaganda. Even our own Christian brothers and sisters are overwhelmed with fear.

Inside this church, however, there seems to be no fear. These are the faces of determination. Like so many across Ukraine, Baptists here, in this one church in Lviv, are stepping up to meet challenges with a sense of togetherness and sacrifice. The church, like the rest of the country, is operating in a melting pot, and a sense of unity is being forged, not in an abstract sense, but in a sense of blood, sweat, and tears. 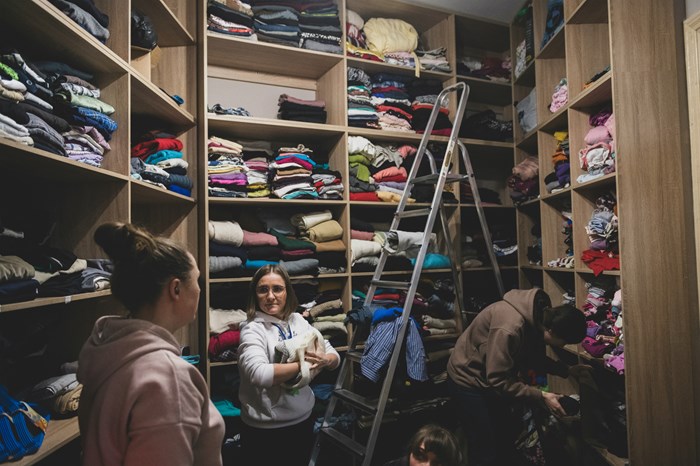 Baptist women organize clothing to donate to those in need. In a nearby warehouse, they collect and sort humanitarian aid from Poland.

They choose, every day, to face the crisis and make the necessary decisions, from the purchase of a car that can transport seven people from Kharkiv to the sorting of clothes donated in a storage room of the Lviv church.

What will they think of this time, when it’s all over?

“At the end of the day, after the win,” Bandura said, “we’ll look back and say, ‘God, it was painful, but it was so precious, so precious.'”