Faith leaders
Home›Faith leaders›In Singapore, a conference on “social cohesion” seeks to connect the region after a divisive pandemic

In Singapore, a conference on “social cohesion” seeks to connect the region after a divisive pandemic

Singapore hosted over 800 delegates for the International Conference on Cohesive Societies which kicks off today. — Photo courtesy of ICCS

SINGAPORE, September 6 – Over 800 delegates from over 40 countries converged at the Raffles City Convention Center here for the second time International Conference on Cohesive Societies (ICCS) which will continue until Thursday.

First proposed by Singapore President Halimah Yacob, this edition of ICCS aims to examine the role of identities in how individuals connect to their communities, following the rise of identity politics and polarization social exacerbated by Covid-19.

“We face common challenges globally as we emerge from the pandemic. We must continue to create and build safe and open platforms to discuss sensitive issues and work together to build unity and resilience in our societies,” Halimah said during her keynote address.

“Now is a time to come together as a family, recognize the beauty of our diversity, and use it to our advantage to tackle the greatest challenges ahead, so that we can build brighter, more cohesive societies for all. .”

The event was also honored by Cardinal Pietro Parolin, Secretary of State for the Holy See, who cited the different religious traditions of Catholicism, Islam, Judaism, Buddhism and Hinduism to urge participants to be promoters of solidarity.

“To build just and cohesive societies, commitment from all parties is necessary,” Parolin said in a video call.

“It is the responsibility of the Church, and of all religious groups in particular, to forge friendships that transcend natural affinities, thereby contributing to the civic and moral sense of a community.”

Today’s event kicked off with a session of presentations on social cohesion moderated by renowned historian, Professor Farish Ahmad-Noor of the University of Malaya.

Together with Professor Lily Kong from Singapore Management University and Professor Katherine Marshall from Georgetown University, the panel notably discussed the paradoxes of individual thought versus belonging to a collective society – in especially in the face of the pandemic.

“I would say for a society to be creative…the ‘we’ is pretty important,” Kong said.

“So if we’re looking at developing a sense of identity for a country and people, which I think few precious places would argue against, then cultivating the ‘me’ is as important as the ‘we’. ‘ to reach this goal. “ 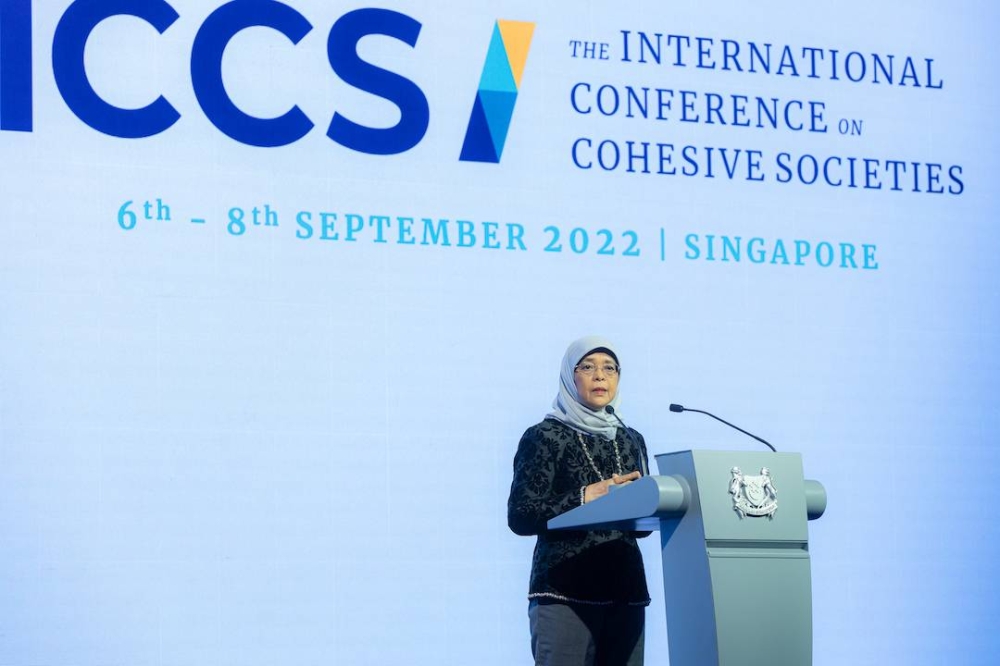 In her opening address, Singapore President Halimah Yacob called on the region to build unity and resilience in its societies after the pandemic. — Photo courtesy of ICCS

Starting tomorrow, two more plenary sessions will be held on harnessing diversity for the common good and technology to foster trust, in addition to several breakout sessions on the themes of cohesion, faith and identity.

Meanwhile, the Young Leaders program involves young leaders from all countries working on community issues and explorations in various places of worship in Singapore.

ICCS is organized by the S. Rajaratnam School of International Studies (RSIS) and supported by the Ministry of Culture, Community and Youth, Singapore.

Among other things, his research focuses on security, conflict and terrorism in the Asia-Pacific.

Earlier in the day, he launched a report titled “Social Cohesion Radar in Southeast Asia”, exploring the factors behind social harmony and unity in countries in the region.