Rajshahi (Agenzia Fid) in the diocese of Rajshahi, in northern Bangladesh, and damaged a crucifix and statues of the Virgin and Mother Teresa, in addition to tearing the Bible and breaking other liturgical objects.
According to information from Agenzia Fides, while the faithful are saddened by the unpleasant incident that has occurred in recent weeks in the territory of the parish of Khonjonpur, in Joypurhat, the inhabitants of the village, many of them Muslims, have managed to identify the young man and they handed him over to the police. Archbishop Gervas Rozario, Bishop of the Catholic Diocese of Rajshahi, told Agenzia Fides: “We condemn the violence and reaffirm the right to practice our religious faith in this country, in accordance with the Constitution. To Christians, I say: do not be afraid, let us move forward without fear, with faith in God who is our salvation”. According to the local police, the young man is mentally ill and there is no hostility towards Christians among the local population. Moreover, the cooperation in finding and arresting the culprit was invaluable. Subash Murmu, one of the local faithful, told Agenzia Fides: “We are saddened, but we will repair our chapel. This appears to be an isolated incident, committed by a person with a disorder.”
Of the 165 million inhabitants of Bangladesh, 90% are Muslims, while Christians number around 800,000. Among them, half are Catholics and the rest Protestants. (FC/AP) (Agenzia Fides, 6/8/2022) 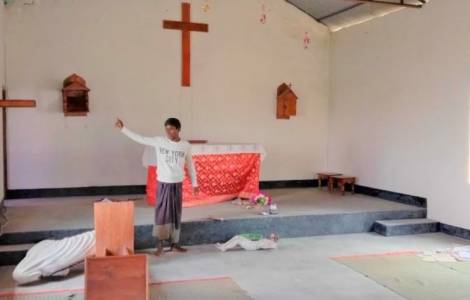